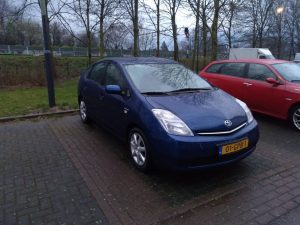 I recently bought a new car, a Toyota Prius Comfort 2008. It was an upgrade from my previous car: Toyota Aygo. After the first week of driving I started to miss certain features such as navigation and Bluetooth. Normally I used my phone for navigation but saw in some new cars that they have Android or Apple car. Buying a “normal” radio just wouldn’t fit me, it had to be “smart”. When I looked around I found several Android head units (I really like to avoid apple 😉 ) but they all were Android 6 or 7. The head unit I wanted to buy has to last for at least a couple of years so I started to search for the newest models. After some research i found my radio, a Xtrons Android head unit which fits my car. I live in the Netherlands and wanted to buy the radio from a Dutch supplier. After a quick Google session I found this company: Audiovolt.

I looked at the product and saw that, if you want to use the steering controls, you also needed to buy a steering wheel interface as well. After a sending a few mails back and forth I finally completed my order. My order consisted of the following items:

The problem we all face, ordering stuff and then also having to wait for it. In the mean while i looked up some YouTube videos of how to disassemble the dashboard, I quickly came across these guys, More Pi, and watched the entire video (34:10). Also watched some video’s that are on YouTube about the head units to see what other users think of it and what apps/features they use.

Finally!! the unit arrived!! Damn that thing is light, has a lot of cables but, hey it looks good. There aren’t that many buttons on it and it doesn’t have a cd drive (who uses them anyway with USB, SD card and online music??). Okay, first lets connect all the cables and find out what they are for, better to look now than when you have it build in 😉 Especially the steering wheel interface, but I forgot to look at this… 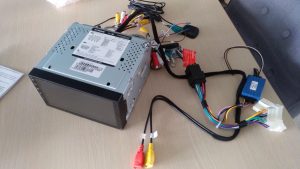 The day has come, the first mod of my car. Not technically my first because I already changed the license plates and my girlfriend replaced the valve caps with pretty blue ones haha. But for this mod i had to take apart the dashboard. The dashboard of the Prius is well designed and taking it apart only takes about 10 minutes and 2 screws. After removing all the panelling, I could remove the current radio. With and 8 and 10mm socket I removed a couple of bolts and removed the top screen and the radio. 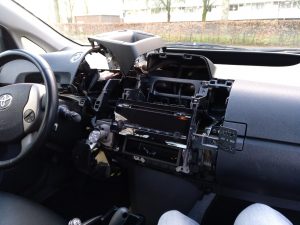 First test the new radio without building it in just to make sure it works. Hmmm it takes around 30 seconds to boot, hope this is only once and not every time I turn on the car… Oh I’m glad to see that when you turn on the car that the radio almost instantly turns on as well. 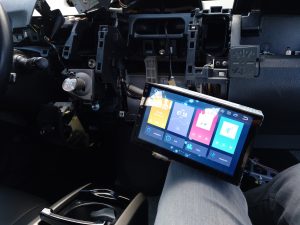 It boots, and I see Android 8 for the first time as a head unit in my car. It looks awesome but i already know I’m going to change the layout. It all works very snappy and at this point I’m all hyped to build it in to see what it is going to look like. First thing I did was connect the radio to my phones hotspot, ok after some updates it used around 500mb, better to connect the car, if it is possible, directly to your homes WiFi network.

Damn i forgot some things…

Whoooo I put everything back and fired up the car for the first time. Ok the radio is working! but the steering wheel controls don’t, hmm crap I forgot those to connect, I thought connecting all the normal connectors should do the trick… Ok I will connect them the next day but first just drive and test it. 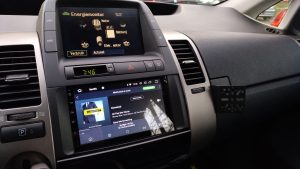 Ok it’s getting warm, let’s control the heat… Oh damn the screen is on but there is no information… I remembered at this point a little thing I saw in the YouTube clip from the guy at More Pi and that was an 68ohm resistor. Normally I order everything online but not now, I want it as fast as possible haha. I found a store that had the resistor in stock and bought 4 of them (just to have some spares) and it costs me €1,-. I mailed the guys at Audiovolt where I bought all the things and told them that the resistor is quite essential but have never heard back from them.

The time has come to fix my mistakes. I took out the dash, screen and radio again. I searched online (some photos) where to put the resistor and fixed it, turned on the car and the top screen works again! Ok the next thing took me for over an hour to figure out, but I was stupid and completely blind… The included steering wheel control interface consisted of 3 wires:

I just couldn’t find out where to connect these wires but after an hour I turned the radio around and saw the wires with the labels Key 1 and Key 2… I felt so stupid haha. Quickly connected the wires and started the car to see if they work. Again, nothing happened. I searched through the settings menu to see if I had to configure something. I found the settings and configuring it was the easiest to do. Time to put the dash back in. 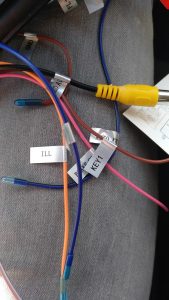 Ok I still need to tweak it but straight out of the box it isn’t that bad. It’s just like 3mm away from where it should be. The next time I must open up the dash I will look at it again but for now I’m just letting it sit this way. It is a universal radio with 2 separate faceplates, I didn’t expect that it would sit flush against the other panels like the stock radio. Xtrons has for the newer models and other car brands radios that are designed for that model (Prius gen 3 radio) so if you have a Prius Gen 3 or newer then it just fits like the stock radio.

This radio is awesome!.. well it is better than a normal radio… yeah it still is just a radio with Android on it. I really love the head unit and all the features that come with it. It turns on immediately and responds very quick. They only thing for me now that I can think of that I don’t like is maybe the resolution of the screen and the “shininess” of it. One other thing I also noted was whenever I use the Google Assistant the voice sounds really crappy.

Do you have a car with a basic radio and don’t have Bluetooth and don’t want to use your phone for navigation then I certainly can recommend this radio! For the € 501,- euro you spend you get a lot of radio back. Also, if you already use Google and Android for everything then this is even better. I don’t own an Apple device, so I don’t know if it also works as smoothly as for me now.

On a daily base i use the following apps:

I just started with only the radio to see if it fits and if it works, the following list is what is still need/want to do:

You may have missed

Android 8 head unit and my experience with it

IKEA TRÅDFRI RGB did not want to connect THAT EASILY

Trust Smart Home, Installing and setting it up!